How to use Saw Palmetto Extract make Man Health better?

How to use Saw Palmetto Extract make Man Health better?

Saw palmetto resembles the palm tree and it produces berries.

It originated from North America and it is still popular in this region in this day and age.

The lifespan of this plant is incredibly long with some of them being able to survive for more than seven centuries.

The plant has provided food for both animals and men for ages thanks to its fruit.

Besides, the fruit of saw palmetto is considered as the most important part of the plant because of its various applications in the medicinal world.

Since early years in the last century, people have used saw palmetto to deal with some health problems, especially related to men’s reproductive organs.

The list of saw palmetto health benefits is getting longer and longer throughout time.

When it comes to saw palmetto nutrition, its richness of fatty acids and flavonoids is the most important part.

Besides, the fruit of saw palmetto contains considerable amounts of polysaccharides that play an essentail role in preventing inflammation.

While people can consume saw palmetto fruit immediately, the market is full of its extract nowadays.

You can find it in the form of tincture, tablet or capsule which brings the same effects.

Some paw palmetto health benefits have been popular for years without scientific evidence.

Nevertheless, the fact proves that many of them are highly possible.

Here are top 5 health benefits of saw palmetto which you should know.

One of the most important and popular health benefits of saw palmetto is to deal with impotence in men.

This benefit has a long history of practice, besides Oysters (which is well-known for raising men’s sexual health).

However, it is still a controversial issue among scientists due to the lack of understanding how it works.

Saw palmetto might help raise men’s libido and enable them to deal with problems in urination, especially at night.

A number of studies suggested that saw palmetto might have positive impacts on the treatment of benign prostatic hyperplasia (BPH).

Some plant-based chemicals present in saw palmetto might have great influence on the testosterone level.

As a result, there will be a reduction in the number of enzymes which make prostate cells grow.

However, there are those who claim that saw palmetto, in fact, contributes to the shrinking size of men’s prostate.

The real effectiveness of saw palmetto in this treatment is still unclear and needs to be studied in further research.

2. Prostate Health
Prostate cancer is always in the list of top fatal causes for men all around the world.

In the case of women, it is breast cancer.

In fact, there is a close association between prostate cancer and prostate enlargement which develops with aging process.

However, you can really prevent this dangerous problem with the help of some simple ingredients like saw palmetto.

In other words, one of the best health benefits of saw palmetto is to prevent and cope with prostate cancer.

The extract from saw palmetto might hinder dihydrotestosterone that is responsible for the enlargement of prostate.

According to reports from the Mayo Clinic, those who experience prostate surgery can use saw palmetto to accelerate the recovery and prevent bleeding.

3. Muscle Growth
Another issue that goes under dispute is benefits of saw palmetto on the process of building muscle.

In recent years, saw palmetto has appeared as one of the best supplements for those participating in workout.

This association gets support from some early research.

Saw palmetto does have some powerful effects on the level of testosterone. Therefore, there is a likelihood that it enhances the muscle mass.

However, it is still a long way to make the final conclusion.

If you feel this benefit uncertain, you can first apply other more reliable foods, such as Bananas or Lentils.

4. Immunity
Perhaps not many people get to know benefits of saw palmetto on the immune system.

The immune system works as the shield to protect us from foreign attacks, such as bacteria and virus.

When our immunity is strong, we can stay away from a series of problems. like colds or coughs.

And this is exactly the purpose of supplying your body with saw palmetto regularly.

Furthermore, some people with migraine and headache also reported that the anti-inflammatory quality of saw palmetto is beneficial to reduce pain.

5. Hair
As a result of saw palmetto’s influence on the hormones, it is possible that one of top health benefits of saw palmetto is to enhance the hair growth.

A number of men who are afraid of hair loss due to aging have practised this recently.

Some studies have illustrated a link between baldness in men and nutrients from saw palmetto.

If you are worried about hair loss now, it is a good idea to start applying saw palmetto extract on your scalp.

Formulation as reference for the Prostate Health Softgels

*Stops the urgency and strain of urination that keep you on edge during the day and up at night.

*Does not cause any side effect, such as impotence, conmmon to pharmaceutical drugs. 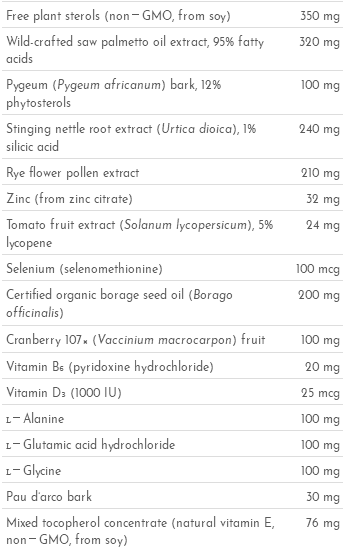