Related Article: * When do you need Luteolin?

*The Secret Behind: When you purchase the Luteolin HPlC 98%

Luteolin is a common flavonoid that exists in many types of plants including fruits, vegetables, and medicinal herbs. Plants rich in luteolin have been used in Chinese traditional medicine for treating various diseases such as hypertension, inflammatory disorders, and cancer. Having multiple biological effects such as anti-inflammation, anti-allergy and anticancer, luteolin functions as either an antioxidant or a pro-oxidant biochemically. The biological effects of luteolin could be functionally related to each other. For instance, the anti-inflammatory activity may be linked to its anticancer property.

Luteolin interferes with nearly all types of cancer cells.It inhibits the growth of new blood vessels in tumors, the metabolism of carcinogens, as well as stopping the progression of the cell cycle in cancer cells. Luteolin also induces cell death in cancer cells.

Luteolin was found to have potent antiviral activity against Japanese encephalitis virus (JEV).
In mice with hepatitis B virus (HBV), Luteolin reduced HBV DNA replication, suggesting that it may be used for anti-HBV therapy. 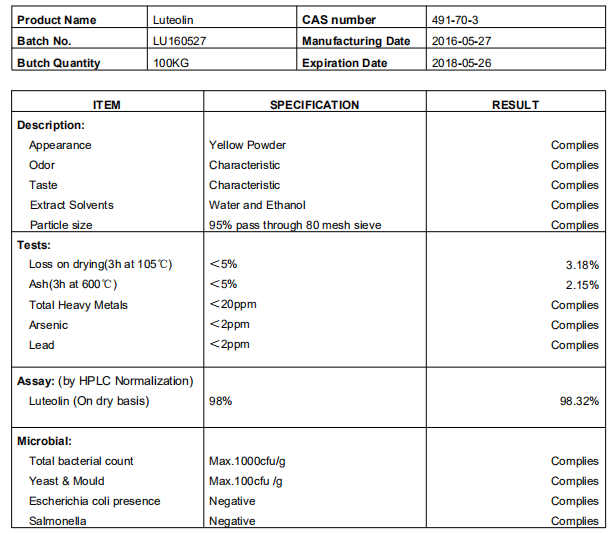 Be the first to review “Luteolin” Cancel reply